Money in the News: When it’s the American Dream

Personal Finance Advice posts 29 ways to quickly create breathing space in your budget. If things feel too tight money-wise right now, there are some good ideas here that I’ve put into practice myself to get that extra breathing room.

Maybe you lose a job, take a pay cut, or have an emergency that eats up your available cash. Things like getting another/better job, starting a vegetable garden, or moving can help, but they take time. When you need to find extra money fast, what can you do (besides hit the payday loan places, which is a really bad idea)? Here are twenty-nine ideas that can be implemented quickly.

Short Logic posts about how the fast growing Groupon is hemorrhaging money.

At the moment, it’s costing them $1.43 to make $1, and it doesn’t look like it’s getting any cheaper. They’re already projected to make close to three billion dollars in revenues this year. If you can’t figure out how to make money on three billion in revenue, when exactly will the profit magic be found? Ten billion? Fifty billion?

On the other hand Trent Hamm from thesimpledollar.com tweeted recently:

So it could just be that most of these big online start-up companies lose tons of money in the beginning. Then again, Erick Schonfeld, co-editor of TechCrunch.com posts an alternate opinion:

Perhaps both amazon.com and groupon.com will be examples of how “money drains” can be necessary sometimes in order to make a large profit? Initial investment in order to make your product grow. 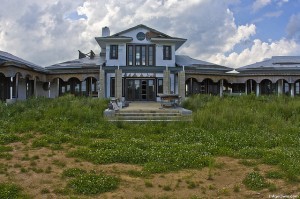 The Consumerist posts images of an abandoned half-built mansion in Maryland (my home state), referencing it as the “American Dream”. The amount of money that likely went into it, only to not finish it and leave it to rot, is one of the ultimate Money Drains.

One Response to Money in the News: When it’s the American Dream