Posted on December 2, 2011 by Crystal Groves

The Consumerist posts that $650,000 people joined credit unions in the month of October after the debacle regarding Bank of America charging debit card fees.

In the month following the announcement of Bank of America’s (subsequently scrapped) plan to charge a $5 fee to some of its debit card users, at least 650,000 Americans consumers have opened accounts at a credit union. According to some reports, that’s 50,000 more than the number of new accounts opened in all of 2010.

MthruF posts an amusing comic in regards to working and student loans: 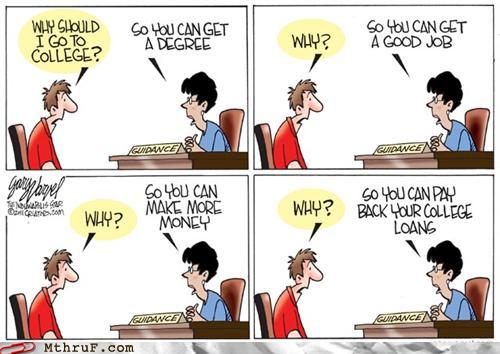 Resource Alert! Saveup.com is a new site that lets you link up your bank accounts and it gives you chances to win prizes and rewards for saving money and paying down debt. A great incentive website that I am trying out to see just how well it works 🙂

The Digerati Life posts about 7 “Rags to Riches” stories of inspiring women.

1. Welfare mom to billionaire. Before J.K. Rowling published her monumental work on Harry Potter, she was a single mother in Britain who needed help to support her daughter. Before all the fame, success and global clamor behind this worldwide reading obsession, J. K. Rowling was a single mother struggling to raise her daughter after a short marriage that purportedly ended after her then husband kicked her out of the house. Then on the dole she went, but life didn’t end there as she took life by the horns: she worked on a novel even as she was living on welfare.

The Consumerist links an article that discusses telling the difference between “Good Debt” and “Bad Debt”.

Mortgages, which many people automatically categorize as “good” due to tax benefits, can hurt you if you’re underwater or your monthly payment strangles away too much of your income. If your payment is comparable to what you’d be paying for rent and allows you to sock away extra income, you can classify it as good.

View all posts by Crystal Groves
This entry was posted in Money in the News and tagged news, resource alert. Bookmark the permalink.